Last year, February was February in Maryland. This year, it’s more like May. Or it will be Saturday, and that’s why Page McKenney most likely won’t defend his crown in the Grade 3 General George Stakes at Laurel Park.

“I believe I’m going to run in the Campbell,” said trainer Mary Eppler of her stable star, who won last year’s General George in his first start at less than a mile in almost three years. “There are a whole lot of different reasons.”

Chief among them is the weather. In 2016, President’s Weekend and the days leading up to it were frigid. Pimlico’s track, where Eppler is based, was closed for training and horses were forced to jog in the shedrow. Already fit, Page McKenney grew sharper with the inactivity. At Laurel, crews worked non-stop to keep the dirt from freezing – leaving a dry, tiring strip that favored closers and tested stamina. Saturday, temperatures are expected to be in the 60s at Laurel, changing the track, the circumstances and Eppler’s confidence level.

“Last year was a totally different setup,” said the trainer. “We had not been able to go to the track for several days (to train) and it looked like the track at Laurel was favoring come-from-behind horses. Saturday is going to be really warm, they’re going to be watering the track and the whole thing is going to be different.”

And Page McKenney, a winner of 17 races from 45 starts, is better going two turns than one. The 7-year-old won the 9-furlong Campbell in 2015 and has also won such two-turn stakes as the Native Dancer (twice) and the Harrison E. Johnson at Laurel. He’s also placed in the Grade 3 Pimlico Special and the Grade 2 Charles Town Classic (twice).

The son of Eavesdropper returned from a nine-month layoff to win the 1 1/16-mile Native Dancer Jan. 21. A minor hip injury and subsequent tendon problem put the brakes on a 2016 campaign that began with wins in the Native Dancer and General George, and a second to Stanford in the Charles Town Classic. Eppler is thrilled to have her stable star back in action, and would prefer to keep him at his preferred distance and race flow. Owned by Adam Stable and Jalin Stable, Page McKenney has finished first or second in nine consecutive races and has been in the top three in 23 consecutive starts (a streak dating to April 2014).

“I think he’s better at a mile-and-an-eighth, and the longer they go the longer they stay around,” said Eppler, “and there’s nothing wrong with the Campbell. We’re just going to try to do that instead of the General George.”

First run in 1954 at Bowie, the John B. Campbell offers a $75,000 purse (compared to $250,000 for the General George) and eight foes. Page McKenney beat half of them in the Native Dancer, and will have to deal with newcomers Souper Lucky and Turco Bravo. The former, racing for Live Oak Plantation and trainer Mike Trombetta, finished second to Kid Cruz in last year’s Campbell and makes his first start in 11 months. Trevor McCarthy rides at 5-2 from post four. Based in New York with Gary Contessa, Turco Bravo won the 1 3/4-mile Birdstone at Saratoga last summer and also won the Stymie and Flat Out stakes last year. The has eanred $591,968 and seeks his 15th win. Rajiv Maragh comes in for the mount at 3-1.

They have Page McKenney (2-1) to beat. The chestnut gelding boasts 17 wins and 13 seconds from 45 lifetime starts while piling up earnings of $1,450,978. Horacio Karamanos takes the riding call again.

“He’s one of my favorite horses. Everybody loves him,” Karamanos said. “He’s very professional. You see him in the morning and he looks like a pony, but when he comes in the afternoon he’s a different horse. He’s got a lot of class. He’s good, so we’ll see where he is going to run. Yes he can go seven-eighths, but he’s won both races.”

The Campbell, won by the likes of Kelso, Mongo, In Reality, Broad Brush and Little Bold John, is the eighth race on the program with a 4 p.m. post time. Laurel cards six stakes, the first of which is the fifth race, with a first post of 12:30. Campbell was a racing secretary and handicapper responsible for the Experimental Free Handicap. 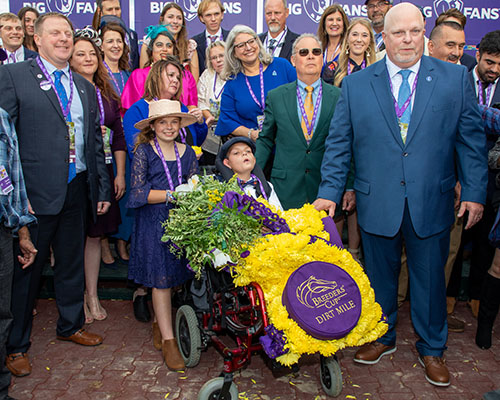