Snap Decision gets another Grade 1 chance

When you run off and win a Saratoga Grade 1 by 13 1/4 lengths – geared down – while carrying 164 pounds, there isn’t much to do afterward but bask in the performance and get ready to do it again.

And that sounds like the formula for steeplechaser Snap Decision, who blitzed six foes in the Jonathan Sheppard Aug. 17 and will try to do the same when he takes on seven in Thursday’s Grade 1 Lonesome Glory Handicap at Aqueduct. He carries even more weight, 168 pounds, and goes a furlong farther at 2 1/2 miles. The $150,000 stakes is the second of 10 races on the Opening Day card, and follows another steeplechase – the $75,000 William Entenmann Memorial featuring 2021 Eclipse Award winner The Mean Queen. Read more about The Mean Queen here.

Post time for the first is 1 p.m. The second goes 32 minutes later.

Owned by Bruton Street-US and trained by Jack Fisher, Snap Decision is 2-5 on the morning line while giving up to 28 pounds to the rest.

The 8-year-old Hard Spun gelding, bred by the Phipps Stable, headed back to Maryland a couple hours after the Sheppard win and has been prepping there since – after a little downtime. It’s been business as usual for the former Shug McGaughey runner.

“He got a good few days off and when he came back in afterward, maybe four or five days after, he was in serious form,” said Graham Watters, who rides the robust bay gelding in morning work and in his races. “He thought he was going to go racing again the following weekend. He was ready to take anyone on. He’s like that after a run, then he settles back down and finds his training routine.”

The routine involves plenty of climbs on Fisher’s synthetic-surface gallop at Locust Hill Farm in Butler, daily turnout and whatever else farm life brings. Like The Mean Queen, he’d go fast and work hard every day if you let him.

In the Sheppard, Watters let Snap Decision roll early when no one wanted the lead and put on a clinic of bold jumps, resolute strides and plenty of speed in hand. Redicean (third), Belfast Banter (fourth) and Song For Somone (fifth) return for the Lonesome Glory – in receipt of 28, 24 and 18 pounds from the favorite – and are joined by veterans Amschel, Iranistan, Noah And The Ark and newcomer Ask Paddington.

“We’ll jump out sharpish,” he said. “If no one wants to go on, we can go in front. If they want to go a million miles an hour, I can sit last. It’s a Grade 1, but even if it was a maiden claimer if you think you’re on the best horse you just want a true-run race. You want to give him the best chance. You take nothing for granted, ­but you’d like to think he can go do the same thing against a similar group of horses. He’s giving away more weight, but all you can say is he’s a big strong horse who can carry the weight.”

A grandson of Hall of Famer Personal Ensign, Snap Decision is a half-brother to graded turf winners Mr Speaker, Fire Away and Vigilantes Way and was better than average on the flat. He won twice, placed in a Grade 3 at Gulfstream Park and traded punches with future Horse of the Year Bricks And Mortar twice. But Snap Decision never took the next step and lost his last 11 starts – the final three on the dirt at Aqueduct – for McGaughey before being purchased by Bruton Street and Fisher late in 2018. Over jumps he became a star with 11 wins and five seconds in 16 starts. Paced by three Grade 1 wins, he has put up $615,900 in earnings over jumps despite missing at least two major opportunities when race meets were canceled because of Covid in 2020.

The Mean Queen ousted Snap Decision twice last year to claim the championship, but went to the sidelines while he won two of three and earned $193,500 this year. The $250,000 American Grand National offers one final Grade 1 opportunity Oct. 15.

Aqueduct hosted its last jump race 48 years ago but Thursday’s course will look familiar to the participants as it mimics Saratoga’s configuration over a 7-furlong turf course. Position and pace will matter, so will traffic. The 2 1/2-mile, 10-fence trip will test speed and stamina and – if he’s in front early or not – Snap Decision will be a target as the clear horse to beat.

“It’s flat, left-handed, sharp, two hurdles on each straight,” said Watters, who watched Aqueduct turf replays this week to help get a feel for how the course might play. “It’s a different story if we’re traveling to the hunt meets – it might be left or right, up and down hills, undulating ground, that becomes different. A racetrack is pretty straightforward. Belmont is different because it’s a longer run from the last fence and you’ve got so much racing room. Saratoga is obviously a bit tighter and this could be same. It’ll make no difference to Snap. He’ll go and do his things.”

Ask Paddington, a winner of his last four in England, rates a threat for trainer Keri Brion and Metahorse Racing. The 8-year-old struggled in soft ground over the winter, dropping from a 132 rating to 113, but has rebounded since with five solid runs in handicap hurdles – a second in May and then four wins while rising to 139. The last win came July 16 at Market Rasen over 2 7/8 miles. His English running style, typically from the back while running longer trips, wouldn’t necessarily scream suitability for an American racetrack but Brion likes what she sees.

“It’s very funny form, not your typical European to come over here,” she said. “Normally they’re lacking speed or they don’t travel over our ground. He’s really keen, really eager to train and I was really impressed with him when he worked [with The Mean Queen].”

A veteran of 27 starts over jumps (eight wins), he teams up with visiting Irish jockey Danny Mullins at 146 pounds and 8-1 on the morning line. Brion also entered Iranistan (8-1, 148), who tries to get back to form after two poor finishes. He defeated Snap Decision in April, while in receipt of 14 pounds, but pulled up in the Iroquois and was last of six in the A.P. Smithwick at Saratoga in July.

Belfast Banter (144, 20-1) makes his third American start after winning four in England and Ireland. Noah And The Ark (140, 30-1) hasn’t run since winning a handicap hurdle in May 2021. German-bred Song For Someone (150, 10-1) should move forward off the Sheppard for trainer Leslie Young. The 7-year-old kept top company overseas including three autumn 2020 wins. He captured the Grade 2 International Hurdle at Cheltenham that December and was second in the 2 1/8-mile race last year. The Sheppard was his first start in five months. Young also entered Redicean (140, 15-1) and engaged Sam Twiston-Davies to ride the 8-year-old, who rallied to be third in the Sheppard. Amschel (15-1, 142) finished fourth in last year’s Lonesome Glory and was third behind Snap Decision in the Iroquois. 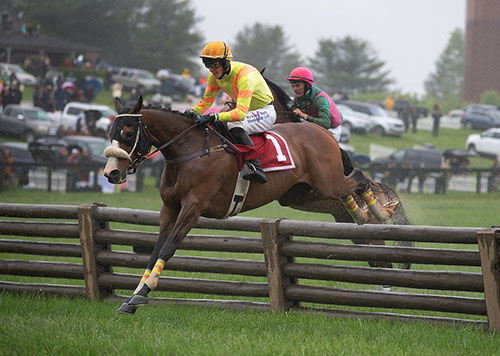